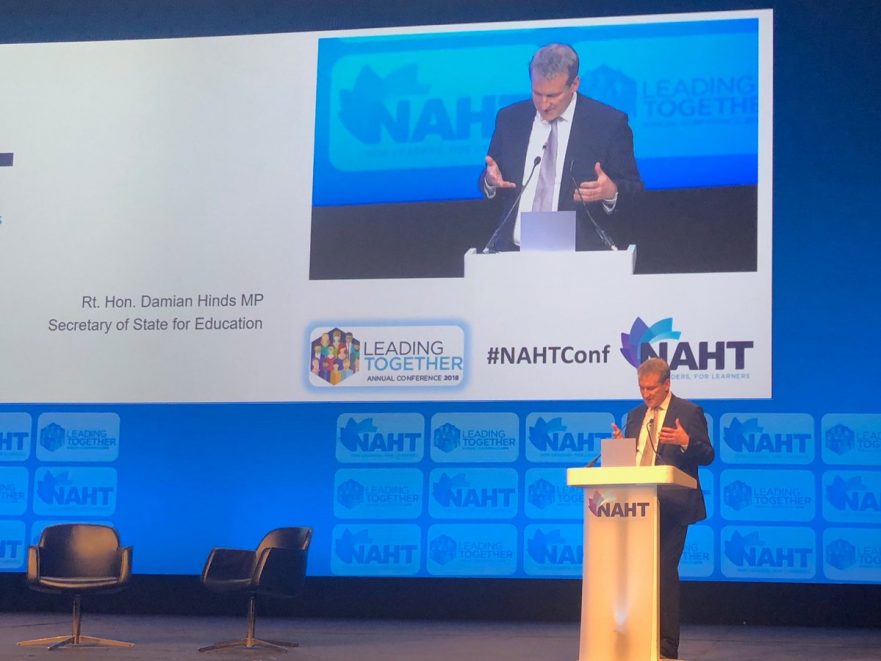 On 4th May 2018, Education Secretary Damian Hinds delivered a speech at the NAHT conference in Liverpool, addressing a range of issues including teacher recruitment and retention, school funding, and new out plans for accountability within schools.

Hinds stated at the conference “children only get one shot at an education and we owe it to them that they can get the best, where they are being let down we need to act quickly – so no one ends up left behind.”

Education Secretaries making big announcements at trade union conferences are not always in receipt of the warmest of welcomes, but his plans were applauded. Hinds discussed the plans for ensuring the best is education is provided by implementing a scheme which “overhauls” the confusing current system surrounding accountability. This is based on his belief that school leaders know how best to improve their schools and they should be free to do this without the DfE or Number 10 getting in their way.

In the implementation of this, he announced schools will be free from numerous inspections from differing bodies, highlighting that it should only be Ofsted who review schools in their role as an independent inspector. Furthermore, the implementation of a “clearer” school system will mean only schools judged to be inadequate by Ofsted will be forced to become academies, and that the “coasting” and “below-the-floor” standard is set to become one measure.

The General Secretary of NAHT, Paul Whiteman, welcomed the announcement and said that “it is absolutely right that there should only be one agency within the remit to inspect schools.” Many school leaders are also delighted by these plans, as visits from the RSC feel similar to inspections and the pressure of layered, unclear accountability has had a negative impact upon schools.