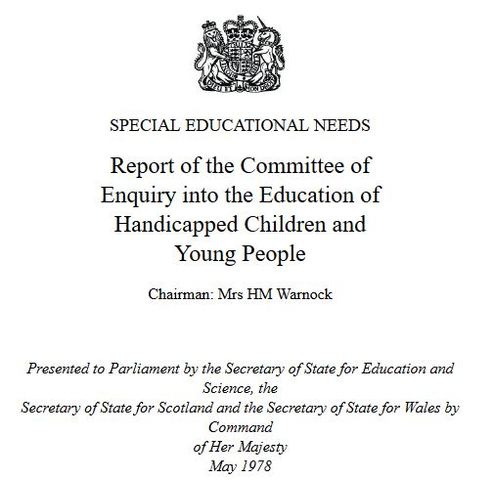 40 years ago, the report from the Committee of Enquiry into the Education of Handicapped Children and Young People, chaired by Mary Warnock, radically changed the educational picture for children with Special Educational Needs and Disabilities (SEND). The report introduced the term ‘special educational need’, to identify any child who needed extra or different support, and posited that, at the time, c20% of children had special educational needs at least for some part of their education career.[1]

The report stated that specialist schools should only be for those children with complex and multiple disabilities which were long term and that mainstream schools needed to develop to meet the needs of all other children, including those with SEND.[2]

Analysis of government statistics by the National Association of Special Educational Needs (NASEN) found that in the decade 2007-2017 the proportion of pupils with Education and Health Care Plans (EHCP) in specialist schools rose from 36% to 44%. In independent special schools, 45% of pupils attending have EHCPs. The number of pupils nationally who have EHCPs has remained stable at 2.8% during this decade. Adam Boddison, CEO of NASEN, has stated that the increase in numbers in specialist schools are causing a ‘capacity problem’ and that the rise has been driven by ‘stricter accountability measures in mainstream schools’.[3]

According to current trends, there are expected to be 534,000 extra secondary school pupils by 2026, of which 58,700 will have SEND and 9,100 will likely have complex needs that qualify them for an EHCP.[4] The question is: where will these children be educated?

Inclusion calls for as many of these children as possible to be placed in mainstream education. An inclusive mainstream school will ensure, as far as possible, that SEND pupils are integrated with their peers and taught in the same classes. However, there is the belief amongst some headteachers and local authority officials that vulnerable pupils are being ‘forced out’ of mainstream schools due to cliff-edge accountability measures. A SEN services manager at Essex County Council has told the parliamentary education committee that there needs to be a new definition of what success is, in the school system. He further states that schools are calling for more Pupil Referral Unit (PRU) places because SEND and vulnerable pupils are not achieving sufficient attainment for the Progress 8 measure.[5]

Dave Whitaker, founding member of the Headteachers’ Roundtable, believes that headteachers will continue to sacrifice inclusiveness for attainment unless there is a reward in place for those schools with higher proportions of pupils with SEND – such as a higher Ofsted rating.[6]   Will Damian Hinds’ recent announcement of his intention to simplify the accountability framework for schools allow for such radical measures? And would they usher in a new era of inclusivity – or do they risk embedding the very culture of low expectations against which the Warnock report stood forty years ago?